Ah, do you really believe

Oblivion has the final say in what is to be forgotten?

For it is oftenly an image from the ashes rising

And stand in flesh, in full reality

Forever framed for every day to come.

Transl. to English by Rytis Zemkauskas

Walls also tell stories. Buildings of the city will speak during the festival, stories of interrupted life will be remembered: street artworks, sound and light installations will raise a veil of oblivion. We will remember the once vibrant and today destroyed life of Kaunas Jews, the world-famous Kaunas residents who used to live here.

The work of Tadas Vincaitis – Plūgas is inspired by interwar photography, in which we see a girl – Rosian Bagriansky with her mother Gerta. Rosian was born in 1935 in Kaunas. Her father, Paul Bagriansky, was a successful textile merchant, and her mother was a Paris trained concert pianist and music teacher who later became the Konzertmeister of the Lithuanian Music Theatre after the war. The family survived the Holocaust. You can read Rosian’s story on our website: https://istorijufestivalis.eu/en/stories/rosian-bagriansky-en/ In this street art piece we also see one of the most beautiful poems of the Lithuanian Jewish poet Hirsh Ošerovičius.

Osherovitsh was a prominent Jewish poet. He was born in 1908 in Panevežys. He studied law at the University of Kaunas. Until the Second World War he worked for various Yiddish newspapers, here, in Kaunas he started his literary activity. At the beginning of the War, he evacuated to the USSR. After the War, he settled in Vilnius and wrote for Moscow Yiddish newspaper but in 1949 he was arrested for “anti-soviet” and “nationalist-Zionist” activities and was deported to Siberia where he spent 7 years. In 1956 he returned to Vilnius where he continued his literary activity. His poems written in Yiddish were translated by prominent Lithuanian poets. In 1971 he emigrated to Israel. He continued his literary activity and published several new books, was awarded several important literary prizes. Osherovitsh died in 1994 in Tel-Aviv.

The soundtrack is DJ Iduba Selecta: “For the CityTelling Festival, the ambient music selection with reminiscences and reflections on people of different cultures who lived near river Nemunas was chosen. I grew up on this river myself, so the life of the stream, fish, water birds and people living nearby, etc. is a close and perceived issue. Growing up in the environment of the time, the issue of Jewish culture and heritage was relatively little reflected and researched. So the theme and content of the festival allowed for a deeper and more conscious exploration of it. The presented musical “soundtracks” is the journey, stream within personal interaction with authentic Jewish culture and musical explorations, intuitively, immanently connected with the river Nemunas. These include some field recordings, finders, and elements of Yiddish contemporary music, mixing with electronic, fusion, and free improvisation. These sound experiences complement the graffiti works and can be meditated as an independent interaction between poem, sound, and environmental surroundings.

Tadas Vincaitis – Plūgas is one of the pioneers of street art in Lithuania. His works can be seen in Kaunas, Vilnius, Šiauliai, Riga, and other cities. Since 2005 the artist participates in group exhibitions in Klaipeda, Vilnius, Kaunas. The artist’s works adorn many private facades and interiors. 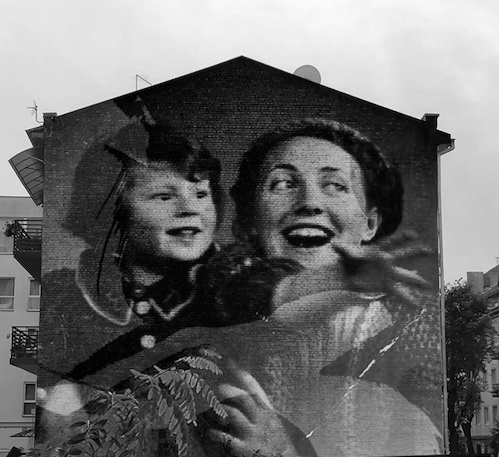